Change is good.  Change is especially good if it means getting your shit together to make room for new and better things.  With Spring Break starting this week, it seemed like as good a time as any to redecorate.  To that end we changed up some things in my daughter’s room, ditched a lovely bedroom suit, (it’s sitting at a consignment store hoping for a new owner) so that we can change the guest room into a study and I’ve spent the last couple of days digging out my sewing room.  Before you get all excited, we didn’t do all this stuff over the course of a single weekend.  (Wouldn’t you be super impressed if we had?  I know I would be!)  It’s been a process.  A process that will end with painting.  Lots of painting.  I think the last room on the list will be the study.  Mostly because we still have a queen size mattress to dispose of.  🙂 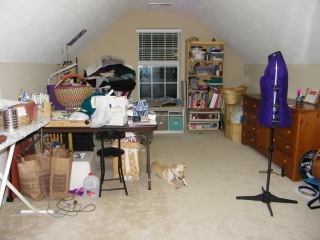 This is the sewing room before the big dig.  I guess it’s not as bad as I thought, but it made me crazy.  What made me crazier was having everything lying about everywhere while I was putting a couple of new shelves together.  Ahhh!  I’ve moved some things around and it still needs more work, but it looks a whole lot better.  And bigger.

This is last night, mid-dig.  What a hot freakin’ mess we have here, people!  So today it’s better.  Not completely finished, but better.  I’ve gotten four bags of junk out, most of the shelves are organized the way I like and the tables that hold my machines are pretty much cleared off.  And I can see all my books and info I’ve collected!  I want to pick up a bit more before I show you that picture.  Wait until it’s painted!  Even better!

The other thing about this process is coming face to face with the harsh reality of the things I haven’t finished.  There are just enough of them to be frustrating, but only one that makes me feel a little sad.  He’s my oldest project and, oddly enough, my dearest project.  It’s this guy.    I’m embarrassed to say how long ago I started working on him.  I still have the drawing I took him from and the name of the breviary he’s from but that’s about it.

He was intended to be a sort of sampler, composed entirely of split stitch and stem stitch.  The bow is satin stitch and the whites of his eyes are brick stitch.  He’s stitched on Kona cotton with one strand of DMC floss.

I’m not sure why I’ve never finished him.  I take him out and work on him from time to time.  I’ve even entered him in an A&S thing, (unfinished, obviously 😉 ) but I just haven’t made an substantial effort to finish this poor baby up.  Maybe it’s because I could never decide what to do with him.  Maybe it’s because it would mean the end of something.  Whatever the reason was, it’s irrelevant, because this is the year I finish my sweet little lion.  He’s too cute to keep hidden away!

I love family, sewing, knitting, coffee, dogs, cats and guinea pigs... not entirely in that order. View all posts by Susan

One thought on “Change”

This guy hogs the bed. #dogsofinstagram #sleepydogsofinstagram
The back of our dead fridge. No telling how long this has been going on. Dead fridge is dead.
Been that kind of day. #catsofinstagram #sleepycat
What do these two get up to when the lights are out? #antiqueshop
Pumpkin Chocolate cheesecake. Haven’t cut it yet. #baking #cheesecake #thanksgiving
First attempt at macarons. Not to bad! I call them ‘rustic macarons’. #baking #macarons